In this edition of the Author Review, I want to introduce you to award-winning and bestselling author Creston Mapes. Fans of Frank Peretti, Terri Blackstock, Ted Dekker, Joel Rosenberg, Lynette Eason, Susan Sleeman, Colleen Coble, and Christy Barritt will love Fear Has a Name from Creston Mapes.

About Fear Has A Name
The Crittendon Files #1, as summarized by the author:

Granger Meade was mentally scarred as a boy by his religious zealot parents. He was bullied at school for his quiet, oafish appearance, which naturally made him a loner and outcast.

Grab Book #1 of The Crittendon Files

But one girl treated him differently—Pamela Wagner. Pam talked to Granger, took an interest, listened, made him feel like a human being. She cared when no one else did, and Granger loved her for it; and still does 20 years later.

So Granger goes back to their Ohio town. Back to Pamela. But she is happily married to reporter Jack Crittendon, who’s embroiled in a time-sensitive story about a pastor who’s disappeared and left a suicide note; a case swirling with suspicion and talk of scandal.

Fear Has A Name caught my attention on page one and never let go.

You will see Granger Meade from each person’s perspective. The question of how to forgive after what goes on in the story begs a personal answer from the reader. The book gently, without being in your face, reflects the struggle of faith during complicated and confusing times.

If you like Christian Suspense, you won’t be able to stop reading until you finish the last page.

I hope you enjoy Creston’s series as much as I do. These links will get you started.

Fear Has A Name, The Crittendon Files #1 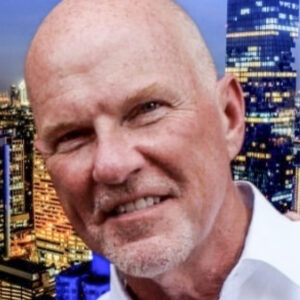 Creston Mapes grew up in northeast Ohio, where he has fond memories of living with his family of five in the upstairs’ portion of his dad’s early American furniture store – The Weathervane Shop. Creston was not a good student, but the one natural talent he possessed was writing.

He set type by hand and cranked out his own neighborhood newspaper as a kid, then went on to graduate with a degree in journalism from Bowling Green State University. Creston was a newspaper reporter and photographer in Ohio and Florida, then moved to Atlanta, Georgia, for a job as a creative copywriter for a printing firm/ad agency.

Creston served for a stint as a creative director, but quickly learned he was not cut out for management. He went out on his own as a freelance writer in 1991 and has been doing it ever since—for Chick-fil-A, Coca-Cola, The Weather Channel, Oracle, ABC-TV, Johnson Controls, TNT Sports, colleges and universities, ad agencies and more. He’s ghost-written more than ten non-fiction books.

Along the way, Creston has written nine contemporary thrillers, achieved Amazon Bestseller status, and had one of his novels (Nobody) optioned as a major motion picture. He plans to continue writing fiction into the sunset.

Creston married his fourth grade sweetheart, Patty, and they have four amazing kids who range from about 21 to 31 years old.

What people are saying about Creston’s books…

“Captivating from breathless start to throat-clenching finish, Fear Has a Name possesses everything a great thriller should and more. A must-read for fans of Terri Blackstock and Brandilyn Collins.”

“Every time you think the tension can’t be more intense, Creston Mapes ramps it up a notch. Be prepared to stay up late (and make sure the doors are locked) when you start reading Poison Town.”

“Sky Zone not only hits all the marks for a ‘must read’ thriller, but it sets a whole new bar for Christian Suspense.”

Get my Thrillers & Truth newsletter delivered to your inbox...

...and download a special companion piece of artwork that I created to go along with my first novel, Dangerous Exposure, a Christian Thriller.

Thanks for visiting! Most of the information on this site is free for you to read, watch or listen to, but AliDent.org is also a business and my livelihood. So please expect hyperlinks to be affiliate links in many cases, where I receive a small percentage of sales if you make a purchase by using the link. I only recommend tools, books, and services that I either use or people I know personally use and enjoy. Integrity and authenticity continue to be of the highest importance to me. Read the privacy policy here. I hope you find the site useful! Thanks - Ali